Weekend in VALBONE – by Robin Holleran 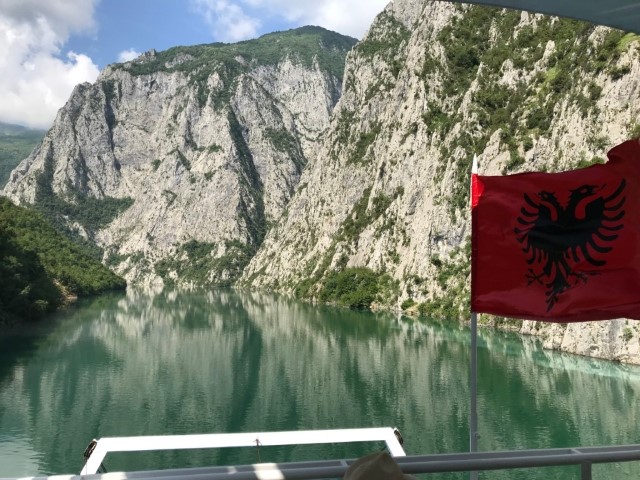 Valbone: The Edge of the World

When we turned the corner, and the Valbone Valley came into view, it took our breath away—meadows and forest surrounded by the jagged, awe-inspiring peaks of the Albanian Alps (sometimes ominously referred to as The Accursed Mountains).

Our group had just spent most of the day hiking the well-known trail from Theth, and I was grateful that we would have time to further explore the area. The village of Valbone is a launching point for exploring the Valbone National Park that is filled with alpine landscapes and terrain, glacial springs, waterfalls and immense rock outcroppings as well as abundant wildlife. The river that meanders through the valley is also the largest in the Albanian Alps.

The Valbone National Park borders Montenegro as well as the Gashi Nature Preserve, Nikay-Mertur Nature Park and Theth National Park. The combined size of these preserved areas adds to the sensation that Valbone is a place where one can get about as far away from the hubbub of daily life as possible, despite being only a few hours from Tirana.

Albania, Kosovo and Montenegro are also discussing the creation of an intercountry national park tentatively called the Balkan Peace Park that would combine these areas in Albania with national lands on their side of the borders. If this happens, the park would be the largest protected area in all the Balkans. 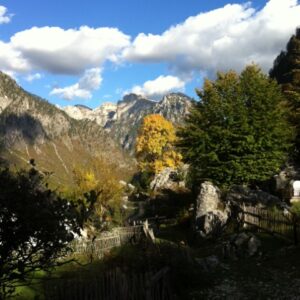 Because of its remote location, the pristine mountains are still densely forested and boast an exceptional and varied plant and animal life.  In addition to the plentiful stands of beech, pine and oak, it is one of the few places in the country where you can find Norway spruce.

The Valbone area is also a haven for brown bears, grey wolves, wild boar, roe deer, wild goats and possibly for the endangered Balkan lynx. At higher elevations, far from humans as possible, live the elusive chamois (a small goat-antelope-type animal). It is also possible to spot some of the 145 species of birds that include a number of different eagles, falcons, hawks, owls, vultures, and a large turkey-like, ground-dwelling western capercaillie.

An unforgettable ferry and night in a traditional home

The Koman Lake ferry, a 2.5-hour ride through some of the most beautiful countryside in Albania that has been called “one of the world’s great boat trips” by a major travel book publisher. It is another way to get to Valbone that should be a high priority on your list of to-dos—and could easily become the highlight of your trip north. Put your feet up, lean back and enjoy the view as the ferry glides across the blue mirror-like reflections of a river between towering green mountain gorges that was created 50 years ago with the construction of a dam.

Just make sure to check the schedule before deciding to take the ferry. It is only open seasonally and even then can be a bit sporadic depending on the number of passengers. It’s also not uncommon for the boat to stop along the unique route to pick up and discharge local passengers (and sometimes their livestock) who live in villages tucked away in the surrounding mountains. 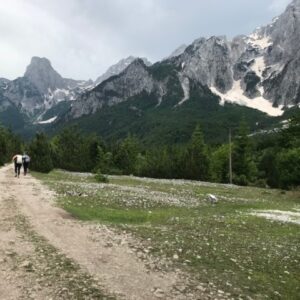 Once you are in Valbone, the wooden alpine Guesthouse Kol Gjoni’s a top choice for spending the night. It was one of the first traditional homes in Valbone to open its doors to foreign tourists and continues to be one of the most popular places to overnight.

The owner is super friendly and enjoys sharing the northern Albania culture, traditions and local farm-to-table traditional dishes with his guests. The views from the guesthouse are spectacular and it is easy to get lost in your thoughts just sitting on the balcony and taking in the surrounding scenery.