“Theth, Albania – On The Road To Great Things” by George Ott 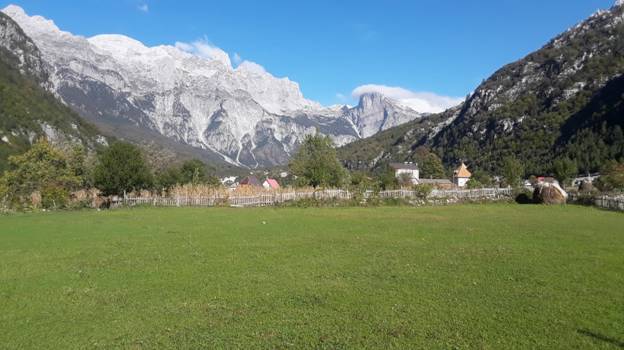 ON THE ROAD TO GREAT THINGS

Riding along on the road between Shkoder and Theth in Northern Albania, I am reminded of the foothills and mountain valleys of Northern Utah. Tall brown grasses, cattle, and sheep wandering the long ridges that separate the small farms and ranches.

Shepards, cattlemen, and dogs moving animals along the road at a pace that matches the time-honored necessity to seek food lower down the mountain as the days get shorter.

Theth, Albania is the center of the Theth National Park and has been declared a Protected Historic Center.  At almost 3,000 ft above sea level, the valley is secluded and one of the most beautiful and unspoiled mountain valleys in Europe.

Peaks rise up above the valley floor and the tallest in this, the Accursed Range, rise up above 8,000 feet. Shkoder the regional urban center, in good weather is a two and a half-hour drive away.

The road is paved up to the pass and when I visited in early October, the last ten miles from the pass down to Theth were under construction. The amount of work I saw on this section of road was staggering, the steep shaded slopes and rocky terrain would challenge even the most experienced road builder.

Just getting supplies up to the work would be a logistical challenge. Actually building the road, stabilizing the slopes, all while keeping the route open is a monumental task.

At the top of the pass, there is a spectacular view and a new lodge being built to take full advantage of that view. A man was there greeting us, he said he was the owner and wanted to share this beautiful part of his country with all who traveled to it. I agreed to return in a few months to see the progress.

From this point on, the path was completely under construction and it took longer than normal to drive those last few miles.

Arriving in the valley I was reminded of the many mountain valleys I have seen in the Rocky Mountain West of the USA.  Mountain peaks like the ones in the Sawtooths of Idaho and the San Juans of Colorado were everywhere. While the cloud-shrouded rock face (center right) looks a lot like Yosemite’s Half Dome.

I wondered why I didn’t see even one group of rock climbers anywhere during my 3-day visit. There was ‘clean’ rock on what appears to be unexplored routes everywhere I looked. I’m not sure why this valley is not being explored by rock-climbing enthusiasts, especially now as many other countries were closed to travelers. There were some ‘trekkers’ like myself, here to hike the trail to Valbona or down to the waterfall and the ‘Blue Eye’ spring, downriver from the main village. 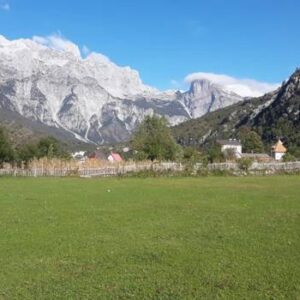 Hiking in and around the village I was reminded of Silverton Colorado a bit, but with fewer people. Large gravel deposits along an icy blue/green snowmelt river and lots of open space between buildings. A dog barking in the distance, as well as the clanging of small bells around the necks of moving goats, were the only noises.

Tranquility and isolation were obvious adjectives here in early fall and one can only imagine what it’s like in the dead of winter. Preparing for the following day’s hike, I tried to get acclimated a bit by walking a short way down the river all the while knowing what goes down must also come back up… 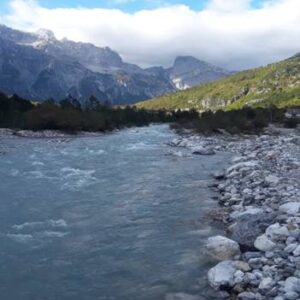 A short 30-minute hike brought me to a very nice secluded waterfall.  I could not find an easy way to hike directly up to it, so I turned back uphill and went towards the village to see the visitor’s center. Recent storms had left the village without power and the visitor’s center, with its new solar system, had the only electricity in town. 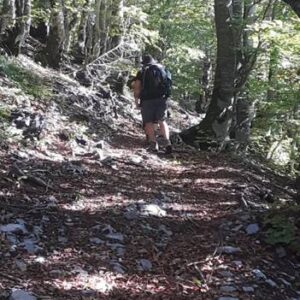 I met a young German couple who were traveling the Balkans in their van and at dinner, we made plans to hike up the pass the next day. The total length of the hike varies slightly depending on which direction you are traveling and where your starting point is.

Officially the trail portion is 17 Km in length (10.5 miles). The guest house I was in is another 2 miles below that starting point. From the Theth side, the trail is steep and shaded, gaining 1150 meters (3770 feet) in 6.5 km (4 miles). I chose to hike up and return back to Theth the same day. If I do it again, I would choose to not hike back down the Theth side but continue to Valbona.

As we hiked up I was reminded of the trails I’ve enjoyed for many years in the Rocky Mountains. Having spent the beginning of my adventure in Albania at sea level, I was quickly struggling and covered in sweat. We were on a Hoback (a sharply crested ridge) that was steep enough to be a very good advanced ski run.

As I followed the short steep switchbacks, I kept looking up at the gaps in the trees. Yea, I could ski this; I thought… it’s just a matter of getting to it in mid-winter. I was fortunate that the young couple I was with took mercy on me and paced their own hike to not exceed my speed. We stopped a couple of times for water and pressed on as the midday sun started to warm the slopes even in the shade.

About 3 hours into the climb we could see that we were getting close to the top. A couple of openings gave us a spectacular view of the valley below. After a snack out in the open, we felt re-energized and pressed on for the pass. Little did we know what lay ahead.

After exchanging greetings with a trail crew of sorts, we came around a bend to see a shelter with a large shaded deck. Lots of people and lots of refreshments as the locals had built an entire bar up on the side of the mountain! 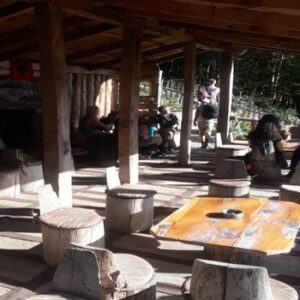 There were many introductions with hikers from all over Europe (and the obligatory shot of Raki). We then headed for the crest in the trail that was the original goal. 30 or 40 minutes later we were there. Many others were reaching the pass from the other side. I saw a group of young travelers I had met two days before in Shkoder and we laughed at the coincidence of meeting at the top.

Back down to the bar, we went…for another break and yes, another shot of Raki… Raki is the local homemade drink that varies throughout the Balkans. It is made from whatever is grown in that particular area. Mostly grapes, at least in Southern Albania, it is high in alcohol content and it’s impolite to not graciously accept it from the locals who are offering it.

At this time in the trip, it appeared as though I had painted myself into a corner. The kind German couple has continued down towards Valbona, I have had 2 shots of alcohol and the shadows on the mountain are starting to get long…

Fortunately, the hikers from the other side were headed down to Theth, so I tagged along with them. There were a few from the U.S. and we talked about where we were from and how things were back home.

My balance was noticeably affected by the Raki and strenuous hiking earlier in the day. I was thankful for my hiking poles and used them a lot on the way down. My knees not being what they once were, I moved slower and the hike down towards the end became more strenuous than the hike up. Arriving back at the guest house after dark I was thankful I had a warm dry bed and a hot shower waiting for me. 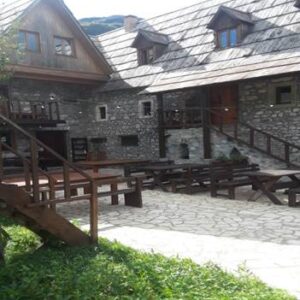 The managers of the guest house were very easy to get along with and welcomed people into the home they had occupied for generations. Even with the inconvenient power outage, the home was warm and the food delicious.

The next day I made easy arrangements for a ride back to Shkoder in a vintage ‘80s Mercedes bus. Quite a ride over the top of the mountain and when we got to the city, my driver had to use side streets to get me close to downtown as his vehicle was not quite legal… Always exciting traveling in Albania!

All signs point towards a growing tourist trade in Theth and I hope that visitors take the time to learn about the local customs, the beautiful wild country, and especially the interesting people in the Theth Valley. I hope you have enjoyed this story as much as I enjoyed exploring a popular part of Northern Albania.